Welcome to the SuStaIn ML Tool in Neugrid!

This project has received funding from the European Union’s Horizon 2020 research and innovation programme under grant agreement No. 666992.

This tool allows to characterize and individual with a subtype and stage based on an Alzheimer’s disease-related brain atrophy model defined by means of Subtype and Stage Inference (SuStaIn) algorithm (see details below).

How to run the analysis:

You have to upload a T1-weighted 3D MRI scan as a zip file containing DICOMS or nii.gz archive, then provide the following information:

The MRI image will be processed with freesurfer 5.3 and relevant brain volumes will be extracted to assign the subject an atrophy pattern and the relative model stage. 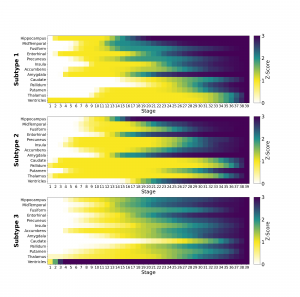 SuStaIn is a novel data-driven approach designed to discover disease subtypes and characterize each subtype by means of a z-score progression mirroring the severity of the biomarker affected by the disease. The SuStaIn model employed for this tool was trained on the basis of brain volumes from subjects from the ADNI data cohort in order to discover Alzheimer’s disease related brain atrophy patterns. The training set was composed by subjects aged 54-90 that were either cognitively normal (CN), affected by mild cognitive impairment (MCI), or by Alzheimer’s disease (AD).The volumes of relevant brain regions were obtained from T1-weighted 3D MRI scans by means of freesurfer 5.3, specifically volumes of hippocampus, middle temporal cortex, fusiform gyrus, entorhinal cortex, precuneus, accumbens area, insula, amygdala, caudate, pallidum, putamen, thalamus and ventricles were considered.

The SuStaIn disease model accounted for three disease subtypes (Fig.1). The first disease subtype (Subtype 1) represented the expected atrophy pattern for AD. It  is characterized by an initial atrophy (Z-score = 1) that of the ventricles then progressesing to hippocampus and entorhinal cortex, that are also the first regions to show full abnormality (Z-score = 3) alongside amygdala. The second disease subtype (Subtype 2) shows an atrophy pattern where abnormality starts in thalamus and pallidum (Z-score = 1) and then spreads to caudate, putamen, insula, precuneus towards the inner regions of the temporal cortex. In this subtype, ventricles and hippocampus start shrinking later with respect to Subtype 1. The third subtype (Subtype 3) shows an atrophy pattern where ventricles become fully abnormal before atrophy starts in almost all the other regions, for which a fuzzier, concomitant and faster atrophic progression is manifested in comparison to the other two Groups. 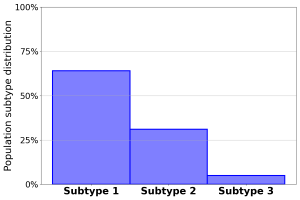 What data do we collect?

NeuGRID2 only collects personal identification information (name, email address, working position). Personal data are provided directly by the user upon registration, and the user can edit his personal data at any time. Personal information is also collected in the event of email communication between users and site administrators.

How will we use your data?

NeuGRID2 collects your personal data so that we can:

What are your data protection rights?

NeuGRID2 would like to make sure you are fully aware of all of your data protection rights. Every user is entitled to the following:

The right to access – You have the right to request NeuGRID2 for copies of your personal data.

Cookies are text files placed on your computer to collect standard Internet log information and visitor behavior information. When you visit our websites, we may collect information from you automatically through cookies or similar technology